On the island of Euboea, Greece’s second largest island lying just off the coast of Athens, surveys for two legs of a new water pipeline were recently completed with remarkably different efficiencies. The difference, according to the lead survey engineer, Epameinondas Valtinos, was directly attributable to Spectra Precision’s highly efficient SP80, GNSS receiver.

The 155 km first leg used three conventional GNSS receivers and a total station, was completed in 25 days for productivity of 6 km per day. The second 75 km leg was completed in seven days using just two Spectra Precision SP80 GNSS receivers and a total station for productivity of almost 11 km per day – almost doubling survey speed. Both legs traversed rugged, heavily forested and mountainous terrain. The second leg with even denser foliage and semi-urban sections made it more difficult than the first leg, according to Valtinos. It had been estimated that the second leg would take 14 days, but because of the efficiency of the SP80’s, it was done in half the estimated time, and importantly, with fewer personnel.

The first leg using conventional GNSS receivers employed seven people, one base and three rovers. While the second leg employing the SP80 required only five people, plus one base and just two rovers. The SP80 yielded an overall efficiency of 5.35 km/person/day compared to 2.06 km/person/day for the conventional GNSS receivers — for an overall efficiency gain of 160 percent. Compared to the conventional GNSS receivers used on the first leg, “the SP80 receivers on the second leg were much quicker to fix positions and better able to store more points under trees in difficult, heavily-forested terrain and between buildings in densely populated areas to reduce delay,” said Valtinos. In addition, the need for the total station was almost eliminated “because the SP80 was so efficient in taking measurements to building corners and under trees, it dramatically reduced the use of the total station to further cut time on the job,” noted Valtinos. “The lighter weight SP80 also helped improve job speed,” added Valtinos.

The new pipeline will connect a new dam, Seta Manikia, currently under construction, to provide municipal water service to new areas of the island. 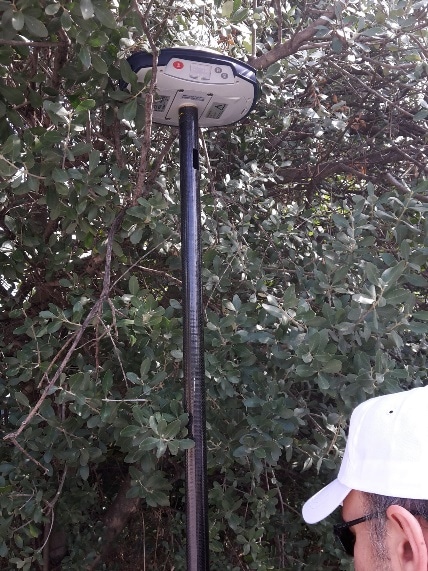 About the SP80 GNSS Receiver

The SP80 GNSS receiver uses Z-Blade processing technology running on a next generation Spectra Precision 240-channel 6G ASIC that fully uses all six GNSS systems: GPS, GLONASS, BeiDou, Galileo, QZSS and SBAS. The unique GNSS-centric capability optimally combines GNSS signals without dependency on any specific GNSS system; allowing operations in GLONASS-only or BeiDou-only mode when needed. The SP80 also has a unique combination of communication technologies including an integrated 3.5G GSM/UMTS modem, Bluetooth, Wi-Fi connectivity, and optional internal UHF transmit radio. The cellular modem may be used for SMS (text message) and e-mail alerts as well as regular Internet or VRS connectivity. The SP80 can also connect to the Internet from the field using Wi-Fi hotspots, where available.