In the city center of Bergen, Norway, the building at Nygårdsgaten 5 has a storied history––literally. 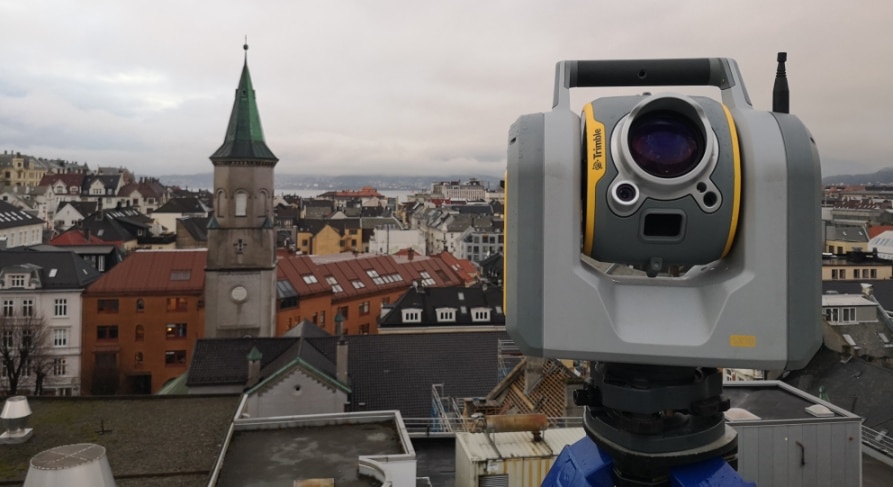 Commanding nearly the entire block, it was the house of Stein Rokkan, a Norwegian philosopher and political scientist, and then the home of Bergens Tidende (BT), Norway’s daily regional newspaper. Although BT moved their offices 20 years ago, the structure is still called the BT building, and today, it accommodates the University of Bergen’s (UiB) social science center, photo archives and various UiB offices. Now, this 150-year-old building is having its story rewritten again.

In a move to meet UiB’s needs for a more functional working environment, the university decided it was time to completely reconstruct the interior of Nygårdsgaten 5 –– all 2,560 square meters (27,560 sq feet) of it. Wanting to maintain the heritage and integrity of the building’s façade, the internal transformation will create a contemporary, welcoming and flexible space for seven of its administrative divisions, including modern workplaces, meeting rooms and a large common canteen.

Capturing such a massive building would not only be a significant challenge in scanning and data processing, but adding to the complexity were two additional aspects: the building has wall-to-wall windows, and surveying and scanning accuracy requirements ranged from 0.5 mm to 2 mm, respectively. “The scope of this work was intense,” says Svein Ivar Vestbø, a survey engineer with Geomatikk Survey, located in Bergen. “The architect needed a 3D model of the building’s façade at a precision of 2 millimeters which would require a huge number of scans.

And it has more than 500 windows and other glassed features. That means the scanner would shoot through windows and collect millions of extraneous data points inside the building, which would add complexity to the data processing. Also, our measurements of the heights of the multiple floors inside the building needed to be within 0.5 mm, which is incredibly tight.” Such a tall order required precise, efficient scanning and surveying technology, robust data-processing software, and an innovative data-integration approach. Vestbø and his team leveraged these three skill sets and delivered the 3D data depth and breadth needed to help modernize and transform the historic building.

Setting up for scanning
Geomatikk Survey was awarded the BT contract in mid-December 2018. A three-phased project, company surveyors would first need to scan the building’s façade, roof, courtyards and backyards; second, measure and calculate its varying floor heights; and third, scan the existing walls and spaces after the interior is demolished. A boxy structure, the BT building measures 26 m high, 64 m long and 40 m wide (85 ft high, 210 ft long, 131 ft wide) and contains 10 floors. In overall footprint, that equates to about two Olympic-sized swimming pools.

Five days after winning the project, Vestbø was in the field to begin phase one. Standing in front of the building, the structure’s size didn’t concern him but the possibility of snow did. “I hadn’t captured such a massive building before, but I knew the capabilities of the SX10 and that it can scan anything, big or small,” says Vestbø. “What was unpredictable was the weather and typically in Norway we have a lot of snow this time of year. Snow can produce extraneous noise in the point cloud. So I had to choose my scanning days wisely and work really efficiently.”

With the risk of inclement weather, Vestbø chose to capture the roof first. Resembling a thick W, the flat roof has two long rectangular ends running vertically, a wide horizontal strip across the length of the building and an elevated rectangular block in the middle. Dotted around the surfaces are various utility structures and a cluster of picnic tables and benches.  Using a Trimble R10 GNSS receiver, he established site control by setting three temporary fixed points on the roof. He observed each point for about one minute, waited 15 minutes, and then repeated the same process two more times. Tying into Norway’s CPOS GNSS measurement correction service, he obtained an initial overall accuracy between 8-14 mm (0.1 in – 0.6 in) in plane view and 2-3 cm (0.7 in – 1 in) accuracy in vertical. The R10 data was saved using Trimble’s Access field software on his Trimble TSC3 data controller.

Using the Trimble SX10’s total station functionality, he then occupied the GNSS points and set two other control points on the roof. Combining the two measurements not only created a tighter control network of 3 mm, but georeferencing the SX10 setups enabled him to ensure he had good scan coverage before leaving the field as well as reducing both field and processing time. “The integrated survey workflow provided through Trimble Access makes it really easy to move from one instrument to another and sync data between the field and the office,” says Vestbø. “When you’re working against nature, that’s really helpful.”

Focused on the façade
Per project specifications, Geomatikk Survey needed to scan the BT building’s façade, roof, courtyards, and backyard features and produce a point cloud with an overall accuracy of 2 mm (0.07 in). In addition, the architect required a second point cloud that would include the building’s surroundings including trees and buildings across the street. To capture the entire building and meet that precision, Vestbø established seven georeferenced scan locations, including roof corners, street-level building corners and the back of the building, and set up an additional 45 scan stations; those non-registered scans would be tied into the georeferenced scans in post processing.

Setting the SX10 on the roof positions, Vestbø first scanned all of the roof’s features including picnic tables and benches, utilites, raised structures, air vents and fencing along the external edges. From that vantage point, he also had clear sight to scan the courtyards and backyard features, including a glassed-roof atrium, 30 m (98 ft) below. He then moved to the street, and methodically moved around the BT structure, setting up and leveling the SX10 and capturing a full dome scan of every detail of the façade, as well as the courtyards and backyards.

At scanning distances ranging from 2 m to 30 m, each scan took 12 minutes to complete and then Vestbø spent another three minutes using the scanning total station’s built-in camera to take a series of photos. After 13 hours of scanning, Vestbø collected 260 million data points with a 40-60 percent overlap–– fortunately, not a snowflake fell. “The ability to switch between total station surveying and scanning with one instrument allows me to be so much more efficient, both in time and costs,” says Vestbø. “The scanner is surprisingly quick and quite precise, and with so many overlapping points, it makes it much easier to process the data and create an accurate point cloud. It also automatically registers the data so you don’t have to georeference the point cloud during post-processing, which is a huge time savings.” 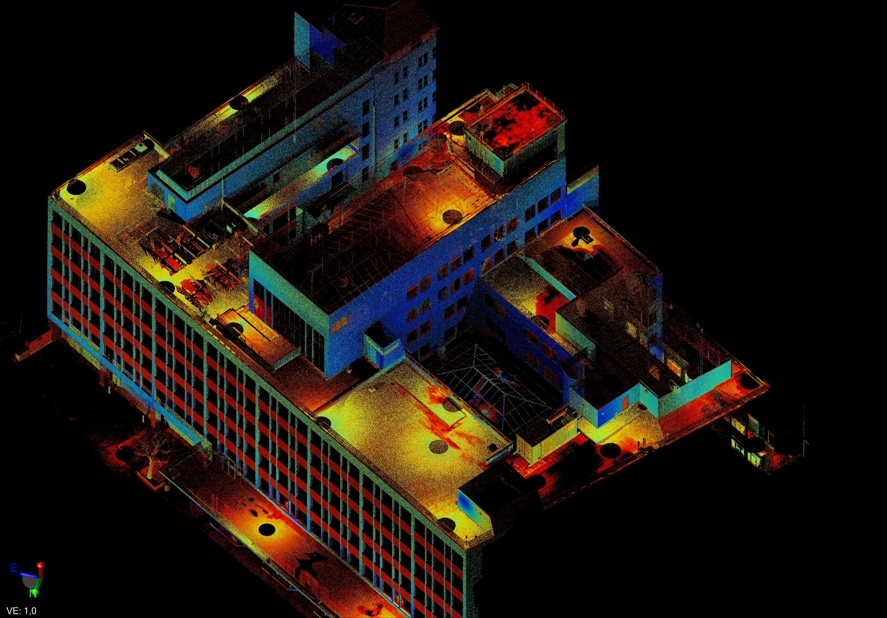 Tying it all together
Back in the office, Vestbø used the drag-and-drop nature of Trimble Business Center (TBC) software to seamlessly integrate the GNSS and scanning data and then he colorized the scan. He then used the seven georeferenced scans to spatially anchor the 45 unregistered scans. He manually delineated a window of referenced points and the software automatically georeferenced each scan one by one to create a spatially accurate 3D point cloud––a process that took about two minutes per scan.

“Previously, post-processing scanning data could be quite time-consuming because you had to georeference each scan first,” says Vestbø. “With the scanning total station, the point cloud is almost ready when you’re done scanning. It’s a simple, automated process to tie in any unregistered scans and it’s much more efficient.” Automation also played a key role in cleaning up the 3D dataset. Scanning through 550 windows and two different glass roofs created millions of extraneous points inside the building that Vestbø needed to clean and clear.

Using TBC’s limit box tool, Vestbø could remove exterior walls to expose the interior data points, and after setting certain parameters and boundaries, the software automatically removed 80 million points of additional data captured inside the building. He ensured the remaining 180 million data points were clean and then finalized the 2-mm point cloud of the building’s façade.

Leveling the floors
In late January 2019, Vestbø and a colleague returned to the site for phase two of the project: measuring and calculating the height of each of the ten floors in the building. Because of the age of the building, the floors were not constructed with uniform heights. Some floors have slopes, or dips or raised sections with a step––one floor may have all three––which has created not only varying floor heights between floors but along the same floor there could be up to 50 cm (1.6 ft) in height variance. The Geomatikk Survey team needed to accurately survey and calculate the elevation levels of each floor to within 0.5 mm (.0001 ft).

The crew first established a set of benchmarks for survey control. Vestbø placed a prism on the inside of a window on each floor. Setting up on the street, he used the SX10’s total station functionality to shoot and record the position of each prism. Once inside, they used a digital leveling instrument to collect the height data. Because they weren’t allowed to draw on the floor, they used tape to mark measuring points. Using the established benchmark point as the starting point, they methodically moved along each floor, collecting measurements from the existing walls, doors and openings and recording, on average, 20 height measurements for each floor.

To add value to those accurate height data points, Vestbø took 2D DWG files of the building that he acquired from UiB and used TBC to integrate them into the finished 2-mm point cloud. Using the georeferenced point cloud, he georeferenced each DWG drawing and then scaled and rotated each drawing so it fit precisely into the point cloud. Through this exercise, they were able to annotate the point cloud showing the correct coordinate and elevation of each height point on every one of the ten floors in the building.

Two days after completing the leveling fieldwork, they provided the architect with an updated point cloud layered with the DWG floor drawings and the calculated heights on each floor. “Scanning not only captures all the unique details of the building––it’s façade, windows, roof structures and surroundings––incredibly quickly, it provides so much data depth and feature definition that it’s like you’re standing in front of the building or inside it from your own computer,” says Vestbø. “A 3D model like that will enable the architects to better evaluate and visualize the structure and incorporate that precise view into their own design model and workflow.”

When phase three begins in late 2019 and the interior of the BT building is razed, Vestbø will again return to the site with the SX10 scanning total station to capture the remaining external walls from the inside. Although he can’t anticipate challenges he may face, he is certain that the scanning details will play a pivotal role in transforming such a historic icon. And that’s a story he’s happy to help write.

by By Mary Jo Wagner