One Step Ahead of the Civilian Drone Market

This year’s European Satellite Navigation Competition, the world’s leading innovation platform for forward-thinking applications in its field, centred on the topic of civilian drone use. On 25 October in Madrid, its 2016 edition culminated in an awards ceremony featuring prominent industry representatives and the winners of 32 categories, which included 11 drone applications. Rafael van Frieken, Madrid’s regional minister of education, youth, and sport, presented the grand prize to the innovative security system GUAPO, which promises to take the use of drones to the next level. 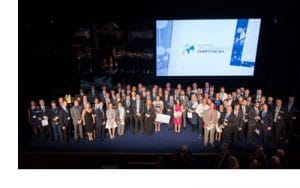 Drones have been one of the biggest trends of 2016. At the same time, concerns regarding the safety of these devices are growing due to the rise in media reports of drones crashing or encroaching on security-critical spaces. In response, the overall winners of ESNC 2016 – Dr. Carmine Clemente and his team from the University of Strathclyde (Glasgow, Scotland) – are developing a unique satellite-based system capable of early drone detection and tracking. GUAPO factors in the electromagnetic characteristics of drones to offer continuous coverage with low resource requirements. It thus provides a cost-effective, sensor-based solution for monitoring areas where security is paramount, such as in the protection zones around airports. In addition, GUAPO is well suited to security-related activities in connection with large events or drone deliveries in e-commerce.

Along with the competition’s EUR 10,000 grand prize, this innovative project is now set to receive an extensive package including cash, marketing support, consulting services, technical assistance, and more as the winner of the United Kingdom’s regional ESNC prize. These benefits are designed to accelerate the idea’s further development and market entry. 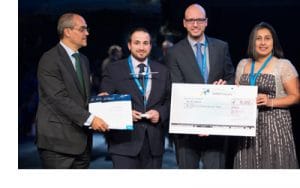 According to the latest drone report compiled by Business Insider, drone sales are expected to surpass EUR 11 billion by the year 2021 – a significant increase on the EUR 7 million the segment accounts for at present. Playing a prominent role in this growth will be commercial drones, the sales of which are projected to quadruple over the next five years thanks to ongoing technological advancements and heightening price competition.

The ESNC’s first-ever attempt to address this up-and-coming market – a joint effort with Xunta de Galicia – was a rousing success: A full third of the 2016 winners were recognised for their innovative drone applications. An overview of the winning entrants in all of this year’s 32 categories is now available on competition website.

“The large number of promising drone applications the ESNC received this year will aid our partner regions in positioning themselves in this future segment,” adds Thorsten Rudolph, CEO of Anwendungszentrum GmbH Oberpfaffenhofen and initiator of the ESNC. “Thanks to our new special prize for UAVs, the competition has also further solidified its reputation as an engine of innovation in new market sectors.”

Having received more than 400 auspicious business ideas and highly advanced technical concepts, ESNC 2016 now offers solutions to the social and economic challenges our world currently faces. Since 2004, over 300 prize-winners, nearly 3,800 entries, and more than 10,000 participants from around the world have transformed the competition into the leading innovation network in satellite navigation. As a result, the ESNC is now playing a key role in the uptake of Europe’s EGNOS and Galileo programmes.

“Downstream entrepreneurs and start-ups play an important role. They are the ones bringing EGNOS and Galileo down to Earth through the applications they develop. This is where the European Satellite Navigation Competition plays a crucial role,” states Matthias Petschke, Director for the European Satellite Navigation Programmes of the European Commission. “The ESNC has accumulated a track record of success in fostering innovation and application development in satellite navigation since its launch in 2004.”

Satellite Masters Conference showcases the space-based technologies of tomorrow
The Satellite Masters Conference has become an important gathering place for industries, scientists, and start-ups involved in the commercial use of Earth observation and satellite navigation. Held at Madrid’s Circulo de Bellas Artes for the first time, this year’s event also provided a festive setting for the ESNC awards ceremony. The winners had the chance to present their ideas to the international Earth observation and navigation scene and discuss innovations in space-based technologies and services with those in attendance. The conference, which was initiated by AZO and co-organised this year by madri+d and Comunidad de Madrid with additional support from Deloitte, took place on 25-26 October. Scheduled to follow the very next day in the same location was the H2020 Space Info Day, an event organised by CDTI, Comunidad de Madrid, and madri+d.
www.satellite-masters-conference.eu

AZO has been organising the ESNC in close cooperation with an international network of research, industry, and regional entities since 2004. By leveraging its extensive experience in building and maintaining global innovation networks and organising related contests, AZO supports product innovations and the creation of new companies all along the value chain, particularly in the field of commercial aerospace applications.