La Réunion: Building a Road in the Indian Ocean

The remote Indian Ocean island of La Réunion is a French overseas territory lying between Madagascar and Mauritius. Measuring 2,512km² in total with 866,506 residents, the island is densely populated with approximately a quarter of this population living in the ethnically diverse capital of Saint-Denis. The island is home to one of the world’s most active volcanoes, the Piton de la Fournaise, creating a unique landscape that is now a World Heritage Site. This combination of extreme weather, dense population and varied landscape makes for an extremely challenging backdrop for infrastructure creation.

Connecting the capital to La Possession
The original coastal road, RN1, which connected the island’s two main urban centres, Saint-Denis and La Possession, was located between the sea and the cliff face, making it susceptible to natural hazards such as rockslides and rain floods; this, combined with the frequent high tides, meant the road was often rendered impassable and out of use. This was the case for approximately 64 days a year, having a direct impact on trade, which is 60 per cent dependent on freight transport carried by the Route du Littoral, part of RN1.

With this in mind, La Réunion’s authorities set out to create a faster and safer coastal road to facilitate travel, providing infrastructure to reduce traffic congestion and provide users with greater reliability, comfort and safety. Due to the technical complexity and natural hazards the project faced, Topcon Positioning Group was selected as a trusted partner to help deliver the much-needed road, which is due for completion in 2020.

Constructing the road
At an estimated cost of €1.66bn, the new coastal road – or Nouvelle Route du Littoral (NRL) – is 12.5km long and positioned 80 to 300 metres away from shore in order to avoid the natural hazards. The road comprises three main segments, including a 5.4km-long coastal viaduct and two causeways (an interchange and a causeway linking La Grande Chaloupe and La Possession). 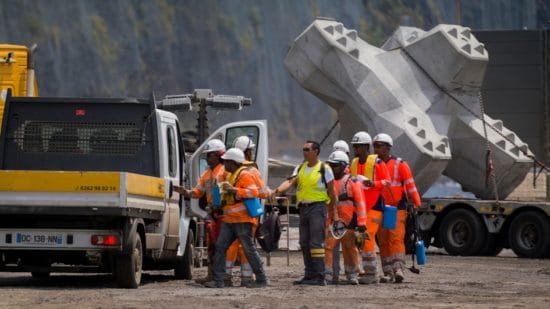 The viaduct is being constructed along the coastline from Saint-Denis to La Grande Chaloupe by VINCI Construction, Dodin Campenon Bernard, Bouygues Travaux Publics and Demathieu & Bard. At 5.4km, it is the longest viaduct of it’s kind in France territory, and with a width of nearly 30m, its deck will feature a flexible dual three-lane configuration that can accommodate a future lane dedicated to public transport.

Given its open marine location, the infrastructure is exposed to particularly harsh weather and sea conditions, such as cyclones and high tides, as well as sensitive and variable geotechnical conditions. The need to prefabricate and protect the road was therefore a necessity. The viaduct is designed to last 100 years and withstand exceptional shocks, including collisions by sea vessels. Perhaps most importantly, the underside of the deck is set from 13 to 22 metres above the sea – beyond the reach of the highest waves.

Using Topcon technology to assist
Topcon technology is being implemented at various stages of the project, including earthmoving, positioning embankment protection blocks and embedding the viaduct. All aspects of the project were managed digitally using Sitelink3D Enterprise, this enabled all equipped machines and survey rovers on the site to be controlled remotely. Being able to access this real jobsite data remotely eliminated any mis-communication and reduced time spent travelling back and forth to the site.

A total of 35 machines, including excavators, dozers and graders, were used on the project, all equipped with Topcon GPS devices. X-63 machine control was used on excavators, enabling them to work under water as well on steep slopes, eliminating over-excavation and costly material overruns. The X-63 uses 360° tilt sensors to track the position of the bucket, while the GPS technology provides precise position information. The system eliminated the need for a grade checker to constantly monitor cuts, increasing both safety and productivity.

Meanwhile, 3D-MC² technology was used on all dozers, allowing them to grade as fast and accurately as possible. The smoother results provided by 3D-MC² meant that operators were able to reach final grade in fewer passes, even in critical applications, saving time, fuel and money.

Topcon’s C-63 compaction system played a vital part in paving the road. The system was able to offer real-time quality control, actively displaying pass counts, ICMV values and mix temperatures. Compacting the road involved multiple rollers working together, and to ensure accurate compaction it is crucial for each operator to be able to see not only their own passes, but those made by other machines. The C-63 system facilitated this, ensuring consistent, accurate and efficient compaction.

All of the data was continuously updated though the Sitelink3D Enterprise status page where real-time progress was displayed and saved for future reporting. This meant that errors and problems could be fixed remotely.

“The project is managed from an office, where all the construction teams are coordinated.  Other members of the team provide support for topography and all the machines are equipped with GPS devices, so all the construction work is tracked using geographic coordinates,” explains François Verillaud, project director at Société Bourbonnaise de Travaux Publics et de Construction (SBTPC).

Building in the Ocean
As well as the project having to comply with very stringent environmental requirements, in terms of marine wildlife and minimising biproducts and pollution created by the construction process, positioning the materials in the ocean presented a challenge in itself. François explained: “It’s challenging to place the blocks that protect the embankment against the sea. We had to know where to put them and the Indian Ocean isn’t always very clear, so you need to be able to find the right position underwater.”

Stéphane Magné, technical director at GTOI, added: “Usually, you can’t see anything underwater, but thanks to the Topcon equipment, we can. All our machines are equipped with GPS devices from Topcon, which has enabled us to deal with all kinds of challenges.

“The advantage of these devices is that you can accurately position all the materials in the right place. The Topcon equipment allowed us to gain production time and reduce the underwater teams, which are quite costly and were not the safest option when the blocks can weigh up to 32 tonnes.

“The georeferenced positioning of our equipment is very useful, especially on the long-reach excavators. We also use the GPS system on our lattice boom cranes, in particular the 300 tonne cranes, to position blocks that are placed along the dike for protection.

“It benefits the construction process – we use it every day and without it our process would come to a standstill.” 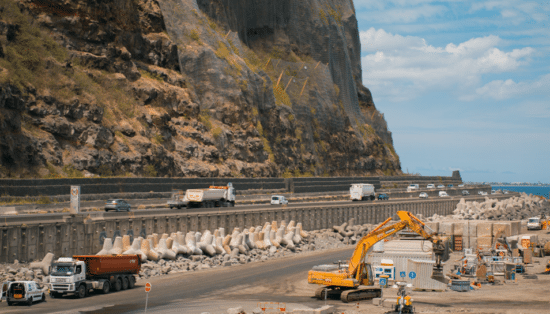 How did Topcon technology help improve the project?
Gael Basseville, sales manager for machine control at Topcon Positioning France, managed the project with the worldwide Topcon team, from the factories in the USA, to the R&D department in Australia and the Business Units in Europe. Talking about the project, Gael said: “What makes Topcon so efficient isn’t just the technology; it’s the unity and expertise of the team. Sharing our knowledge and know-how with other people working on the RNL project has helped Topcon technology and methodology to spread across the island of La Réunion, increasing safety, accuracy, cost optimisation and productivity.”

Due for completion by 2020, Topcon technology has kept the project on track despite contending with natural hazards, challenging landscapes and stringent environmental requirements. From minimising diving teams to positioning embankment protection blocks and the advantage of a digital jobsite, Topcon technology has helped increase productivity across the entire workflow, significantly reducing costs in labour, material, and timescales on the project.

Not only will the new road secure access and increase public safety; it will also decrease travel time between La Possession and Saint-Denis, providing the island with a fast, reliable and modern connection for over 80,000 travellers a day.