The recipient of the Sebastian Sizgoric Technical Achievement Award will have made a major contribution in the field of LiDAR bathymetry and airborne coastal mapping and charting within the past two years. This year’s award has been given to RIEGL honoring their efforts and developments in this field.

The trophy was presented to RIEGL during the 18th Annual JALBTCX Airborne Coastal Mapping and Charting Workshop taking place from June 6 through June 8, 2017 at Savannah International Trade and Convention Center, Georgia.

JALBTCX is the Joint Airborne Lidar Bathymetry Technical Center of Expertise whose mission is to perform operations, research, and development in airborne LiDAR bathymetry and complementary technologies to support the coastal mapping and charting requirements of the US Army Corps of Engineers (USACE), the US Naval Meteorology and Oceanography Command, and the National Oceanic and Atmospheric Administration (NOAA).

Since entering the field of shallow water bathymetry over five years ago, RIEGL has been continually innovating.

Already with the first entrance of RIEGL into the field of airborne laser bathymetry through a research project together with the University of Innsbruck, Austria, special focus was put onto compactness and lightweightness of the instrument hardware and the compatibility to RIEGL’s established hardware and software solutions.

The first commercial instrument RIEGL released specifically for topo-bathymetric purposes was the RIEGL VQ-820-G. This system had a high pulse repetition rate, a short laser pulse, and a comparatively small beam divergence, which leads to high spatial resolution. The VQ-820-G operates at green wavelength only.
The VQ-820-G was the first representative of a new class of ALB instruments, the Topo-Bathy Laser Scanners, which made mapping of shallow water areas possible via an extremely compact sensor at an affordable price point. 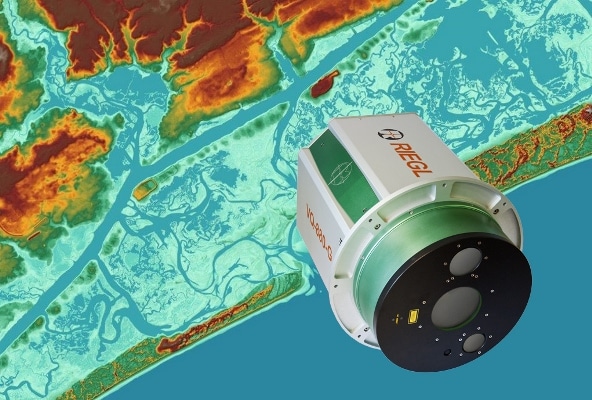 The dramatically improved, fully integrated RIEGL VQ-880-G was launched in 2014. This system, compared to the VQ-820-G, had improved performance in every aspect, especially in depth penetration. An additional infrared channel, in combination with the green channel, gives the system an advantage of being able to pick up a signal from the water surface, even under unfavorable conditions.

The latest instrument introduced is the RIEGL BDF-1, a laser rangefinder employing a green laser small enough to be operated from a small-scale UAV. This combination is capable of generating profiles of waterbodies. This surveying system including IMU, GNSS, and camera has been successfully operated from RIEGL’s self-developed and manufactures octocopter, the RiCOPTER.

RIEGL is honored to be the recipient of this prestigious award!