The German coastal areas of the Baltic and North Seas belong to the most highly-frequented shipping routes worldwide. Implicit with high density shipping traffic is the risk of accidents that can result in release of pollutants into coastal waters. To address this risk, the Ministries for Environment of all five German coastal states, in cooperation with German federal government, engaged in a project to provide sustainable contingency planning system for pollution incidents along the German seacoast.

This project, known as Contingency Planning for Marine Pollution Control (VPS – VorsorgePlan Schadstoffunfallbekämpfung), provides contingency planning for the entire German North and Baltic Sea coasts, including the harbours of Hamburg and Bremen.

A key element of the Contingency Planning for Marine Pollution Control project is the VPS.system software, a GIS-centric software system for collecting, storing, and disseminating all relevant coastal area data to make the information available for pollution protection planning and incident response in the shortest possible time. VPS.system additionally aims to fulfill expectations put to the German coastal states and federal government with respect to sustainable disaster control and hazardous materials accident prevention in German seashore areas. VPS.system has been in use since the year 2000.

The VPS.system software is developed by German company GICON®, located in Freiberg, Saxony. GICON uses the TatukGIS Developer Kernel (.NET edition) for development and continuous modernization of the GIS (Geographic Information System) module, the most used module of the VPS.system.

The GIS user interface makes available all georeferenced information contained in the system, often organized as themes such as sensitive or governmental jurisdictions, shore type, coastal access points, or rights-of-way. A key feature is the ClickInfo shortcut that, with a click of the mouse, takes the user from an object on the map to the record in the database containing information about the object, providing a quick and easy answer to the question: “What is that?” This enables, for example, quick access to response-relevant information for any given segment of the coast. Additionally, the MapTipp feature offers quick information about most map symbols (just position the mouse cursor over the symbol and information appears).

Alternatively, for georeferenced items in the database (e.g., an equipment store, a coastal segment, etc.), it is possible to answer the question: “Where is that?” The user interface includes a button to switch from the database to the GIS map zoomed to the location of the object in question.

Apart from commonly-used map and layer organization, some functions are adapted to individual actions. Distances and area dimensions can be measured. Multi-colored drawings and text for reports or response planning can be entered via the map interface. Together with the map, these elements can be printed as true-to-scale maps or transferred into different graphics or text programs.

The VPS.system receives and processes ship tracking and identification data, updated every 7 minutes, coming from the Automatic Identification System (AIS) via a server infrastructure maintained by the German Federation. AIS is used worldwide for collection and exchange of navigation data of ships. In most cases the GIS symbolizes for each vessel its position, course, navigation status, type, name, time of reporting, and possibly the transport of dangerous cargo. In accordance with the map legend, the ships are symbolized and vessels transporting dangerous goods are highlighted. The MapTipp function retrieves extended AIS data for any vessel in the map area.

To fulfill demands of the Central Command for Maritime Emergencies, several operative components are incorporated into the VPS.system. One of these components is current drift modeling. In addition to limited built-in drift current calculations, the VPS. system can import calculation results of the full-featured drift current model of the German Federal Maritime Hydrographic Agency (BSH) Hamburg and the international SeaTrack Web project via file interface. The results can be represented in the GIS and merged with other information available in the VPS.system. A drifting oil slick is represented as a mauve colored cloud of points, floating oil particles as triangles, and oil particles on the ground or shore as dark rectangles.

Beyond Germany, versions of the VPS.system software have been evaluated or used in St. Petersburg, Russia, Malta, Denmark, and Estonia. 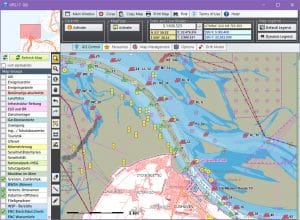