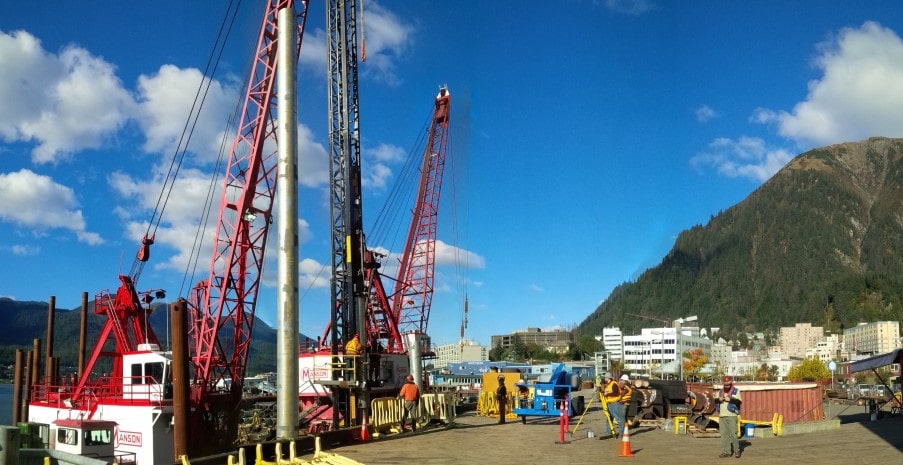 When the Port of Juneau expanded its facilities to accept newer, larger cruise ships, it could not afford to miss the summer tourist season. Chilkat Surveying owner Josh Ivaniszek endured a challenging schedule and adverse conditions to provide accurate construction layout through two Alaskan winters.

Ivaniszek knows firsthand that in an Alaskan winter, where time is limited and temperatures are down, the accuracy and efficiency of one’s equipment becomes a matter of necessity rather than of convenience. He knows this because he lives each day in the land of the midnight sun. Ivaniszek began his surveying career after graduating from Michigan Tech with a double major in forestry and land surveying. He started his own business in October 2015. A young man up for a challenge, Ivaniszek signed on as the solitary survey outfit to perform construction layout of two new cruise ship docks in the Port of Juneau. The two new docks would allow the port to accept larger cruise ships.

Piling it on
The schedule was set to complete half of the site in the first winter season, allowing the south dock to accept cruise ships the following summer. “The first season I did it completely solo,” recalls Ivaniszek, adding, “the second season I had a buddy come help part time.” On most construction projects wooden stakes are set in the ground by surveyors, after which tradesmen will follow and reference the stakes for their construction. The cruise ship docks naturally required many points to be located on the sea floor, for which setting permanent points is a logistical impossibility. The layout work consisted of piles of various sizes, some permanent and some for false work, totaling about 200 piles in all.

Ivaniszek monitored the trajectory of each pile as it was driven by using Trimble Access with the Trimble S6 to take prism-less measurements on the pile’s exterior and offset the distance to compensate for its radius. This provided a location of the pile’s theoretical center. Once the crew drove a pile to its limit, Ivaniszek directed them to make final adjustments as needed to guide the pile to its design location. 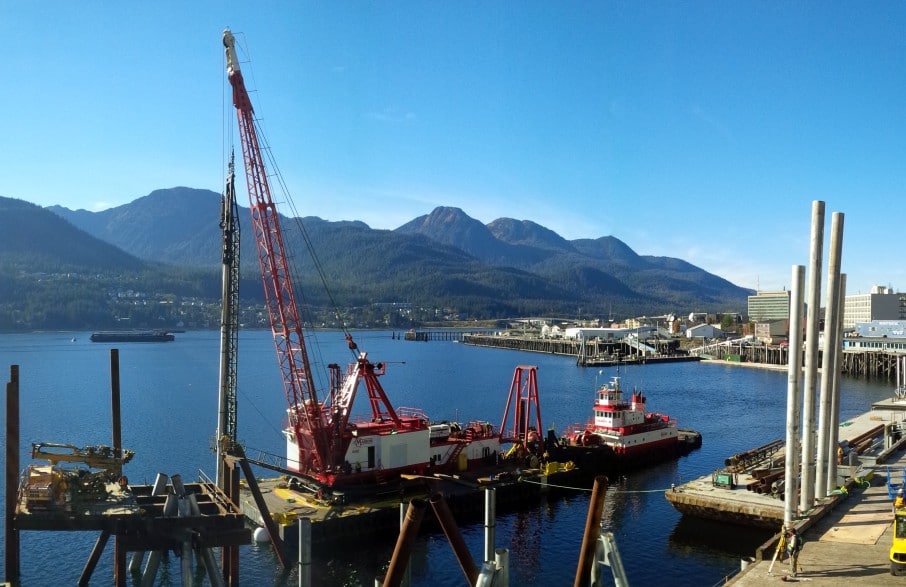 With crews working tirelessly through the brutal Alaskan winter, the south dock was completed on schedule and opened for business in the following summer tourist season. In the second winter, crews set 48-inch (1.2m) diameter piles at the north dock. For these large piles, teams first drilled a hole in the seabed for the pile to occupy. Using his S6, Ivaniszek monitored the boom of the rock drill for plumb, ensuring a straight trajectory as it penetrated the solid seabed, 24 meters below the water’s surface. Ivaniszek reflected on this period in January as having some of the most challenging weather. “I was at the instrument 13 hours a day, light, dark or snowing,” he said. “One hole, I think, took us three days.” When high-cost equipment is running, the crew is working too, often well into the night to ensure the job gets done.

Warming up to the location
Ivaniszek wasn’t always left out in the cold, however. When the time came to set caps on the larger piles, he took advantage of the robotic capabilities of the S6. He fixed a semi-permanent prism on each cap’s pinnacle and then used Access to operate the S6 from within the construction trailer. From there he took measurements on the cap’s center and verbally guided the crew by radio about how to move the cap to seat properly. The robotic approach allowed the crew to work at night when the pile could not be easily seen through the instrument. Ivaniszek reflected on this moment of respite from the elements, saying, “It was great. I called out on the radio the dimensions they needed to move [the caps] and stayed out of the snow.”

“The final pile locations needed to meet a 2.5-inch (5cm) tolerance in order to fit the prefabricated structures. With the robotic function of the total station I was able to perform the entire first winter of construction layout by myself,” he noted.

After the second dock was completed, Ivaniszek had expanded his company’s capabilities by acquiring a SX10 scanning total station. Using both the S6 and SX10 with Access, he located the newly constructed cruise ship berths, catwalks and accompanying structures and prepared an as-built survey.

With ambition and the right equipment, Ivaniszek overcame a tight schedule and difficult weather to meet his client’s needs. He’s now ready for new and challenging projects, even during Alaskan winters.