Airbus Defence and Space built C-Band radars will monitor the environment around the clock in all weathers.

Pre-launch preparations for the Sentinel-1B satellite, carrying an Airbus Defence and Space built radar instrument, are in full swing at Europe´s Kourou Spaceport in French Guiana.

The satellite, which has Thales Alenia Space Italy as prime contractor, is set to be launched on 22 April 2016 by a Soyuz launcher.

Once in orbit it will join its twin, Sentinel-1A (launched in April 2014) to complete the Sentinel-1 polar orbiting constellation, which will significantly improve revisit and response times to provide continuous all-weather round the clock imagery for marine, land monitoring and emergency services. Working together, the Sentinel-1 satellites will image the entire planet every six days.

As an advanced radar mission, Sentinel-1 can image the Earth’s surface through cloud and rain and regardless of whether it is day or night. This makes it an ideal mission, for example, for monitoring the polar regions, which are in darkness during the winter months and tropical forests, which are typically shrouded by cloud. 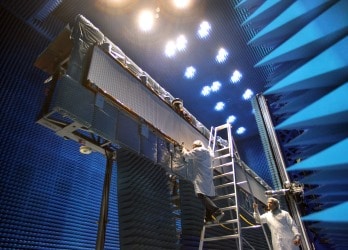 Over oceans and seas, the mission provides imagery to generate timely maps of sea-ice conditions for safe passage, to detect and track oil spills and to provide information on wind, waves and currents. Over land, Sentinel-1’s systematic observations are used to track changes in the way the land is used and to monitor ground movement with exceptional accuracy. Moreover, this new mission is designed specifically to aid fast response during emergencies and disasters such as flooding and earthquakes.

Like Sentinel-1A the “B” satellite carries the Synthetic Aperture Radar (SAR) Antenna Subsystem (SAS) which will be able to acquire an immense amount of data due to its continuous operation capability. The 12.3 meter antenna is made up of five panels. Four of them are folded sideways onto a support frame during launch and will be deployed in orbit.

Integrated on these panels are 280 dual polarized small transmitters delivering a total RF signal of just over 5 kW. These transmitters and their associated receive elements are supplied by Thales Alenia Space and are implemented as transmit/receive multichip hybrid modules integrated into Electronic Front-End (EFE) equipment. Controlling these 280 transmitters individually provides an electronic steering capability of the overall radar beam. By steering the beam across the observation track in a series of 80 km wide strips next to each other on the ground, a medium resolution image for wider swaths of up to 400 km can be assembled. The high transmit power presented a thermal design challenge in addition to the already complex mechanical design task of creating the required highly stable structure of the 800 kg antenna.

The antenna is driven by the SAR Electronics Sub-system which provides the signal processing, timing and system control, creating highly stable radar signals and precision beam orientation. The instrument has been designed to ensure a 2.5 m pixel positioning accuracy on a 400 km wide target nearly 1000 km away on the ground while travelling at 7 km per second. This was achieved with a sophisticated mechanism for extremely accurate real-time orbit position prediction, and very precise timing knowledge to synchronize the SAR image acquisition.

To deliver the radar part of the mission’s performance, the Space Systems teams built and tested at Friedrichshafen (Germany) a 12.3 m x 0.9 m antenna, electronically integrated with the SAR Electronics Subsystem designed in Portsmouth (UK). 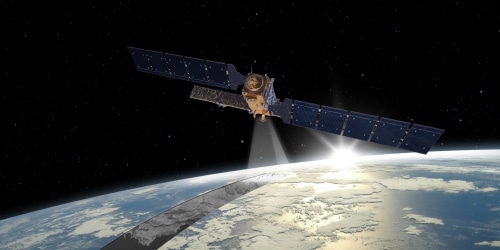 Sentinel-1B is the fourth in a series of Sentinel satellites for the European Copernicus programme, a joint project of the European Commission and the European Space Agency (ESA). Airbus Defence and Space has been a key partner in Copernicus since the very beginning of the programme in 1998. Airbus Defence and Space operates a fleet of optical and radar satellites – SPOT, Pleiades, TerraSAR-X and TanDEM-X – and is one of the leading data suppliers for the Copernicus services. It is playing a major part in the construction of the Sentinel satellites that will complement the data from the Copernicus Contributing Missions.